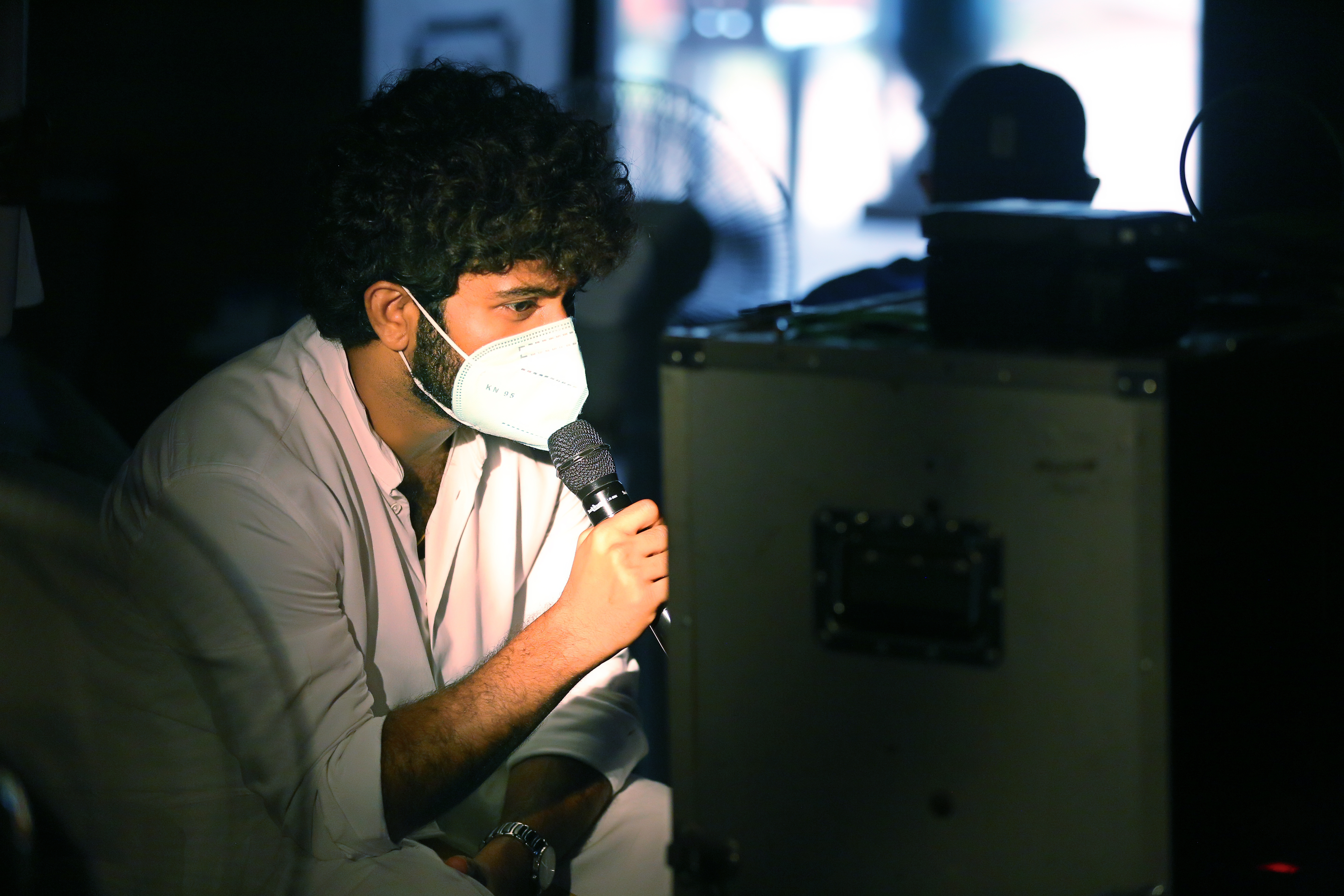 Young and phenomenally talented national award-winning director Prasanth Varma who awed all of us with his first two films Awe and Kalki, is back with his third film!
The film’s title Zombie Reddy was announced with a made-in-Hollywood spine-chilling animation that begins with a peaceful backdrop of a full moon and a temple in close-up angle that turns violent and creepy, as the camera zooms out to show bats screaming, a tomb breaks into pieces to form the title and finally a hand comes out of the graveyard to grab it even as the full moon transitions into a blood moon.  Background score adds intensity to the terrifying visuals.
More intriguingly, what is the connection between Corona and Zombie Reddy? To know that you’ll have to wait till teaser…
The motion poster prepares us to anticipate a first of its kind experience when it will arrive in theaters.
As of now, filming is almost wrapped up.
Given, that is a first ever Zombie film in Telugu based on true events, it is decidedly destined to be a blockbuster!
“Apple Tree Studios is very happy to launch our first movie Zombie Reddy – a first of its kind movie produced in Telugu in this genre. As a Producer of the film I had immense confidence in Prasanth Varma's vision and unique filmmaking style , says Raj Shekar Varma
In spite of the difficult conditions created by the Corona, our cast and crew - directed by the very talented, award-winning Prasanth Varma - worked tirelessly to make this film a reality. We are very confident that our audience will absolutely love this high-quality movie.
It is in line with our Vision of becoming a top-notch movie production house with a well-earned reputation for high quality, true-event based movies that use the most authentic scenes & locales,  the best technical & creative skills to entertain our audience,” signs off  Producer  Raj Shekar Varma.
“Zombie Reddy is a high-concept film. I’m sure it will be loved by all sets of audience. We announced a contest to guess the genre of the film and got tremendous response. Everyone who guessed it right will receive gifts from us.” says director Prasanth Varma.
As informed by the makers, the cast of Zombie Reddy will be unveiled soon.
Here's technical crew of the film:
1. Writer & Director - Prasanth Varma
2. Producer - Raj Shekar Varma
3. Production House - Apple Tree Studios
4. Screenplay - Scriptsville
5. DOP - Anith
6. Music - Mark K Robin
7. Production Designer - Sri Nagendra Tangala
8. Editor - Sai Babu
9. Executive Producers - Anand Penumetcha, Prabha Chintalapati
10. Line Producer - Venkat Kumar Jetty
11. Publicity Designer - Ananth
12. Costume Designer - Prasanna Dantuluri
13. Sound Design - Nagarjuna Thallapalli
14. Stills - Varahala Murthy
15. PRO - Vamsi Shekar